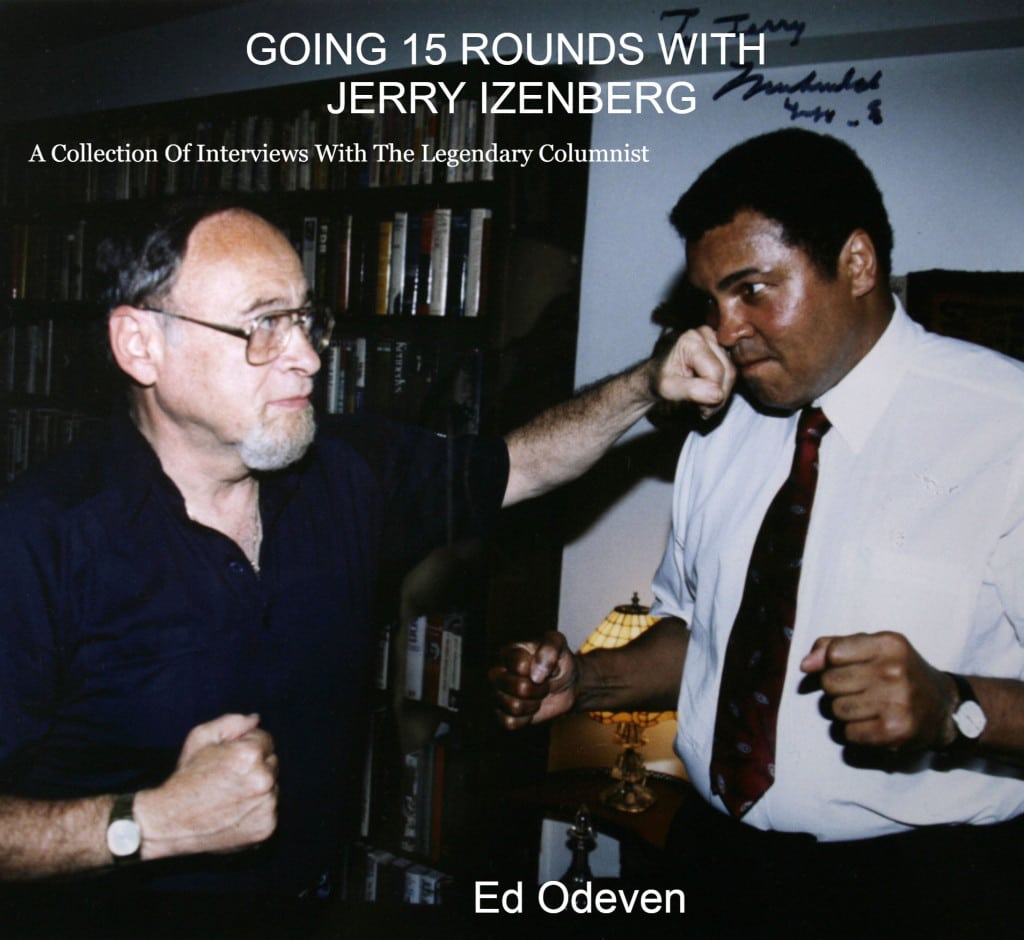 The book published to celebrate Izenberg’s life, Going 15 Rounds With Jerry Izenberg by Ed Odeven details his career in length

In a book published last year to celebrate, chronicle and introduce Jerry Izenberg’s career as a sports journalist, the focus from start to finish was to highlight Jerry’s impressive storytelling skills and decades of sustained excellence in the business.

From the early 1950s to the present day, he has written about championship teams and Olympic icons, baseball and football superstars and boxing legends. Along the way he became one of the best American sports columnists.

Going 15 Rounds With Jerry Izenberg: A Collection Of Interviews With The Legendary Columnist

The book highlights Izenberg’s career and some of his favorite stories. The timing of the book’s release coincided with Izenberg’s 90th birthday in September 2020.

“To say that Jerry Izenberg is a ‘sports writer’ is like saying the Grand Canyon is a hole in the ground,” Fernandez commented. “He is a national treasure, and he is still at the top of his game at 90, an age which he reached on Sept. 10. Anyone who appreciates great writing should read this.” 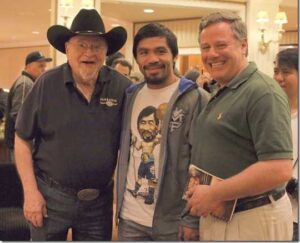 In a series of conversations with Izenberg, his illustrious career is discussed. Some of the seminal moments of his childhood and adulthood are highlighted with vivid details.

A gifted storyteller, Izenberg talks about his close friendship with Muhammad Ali, about meeting Nelson Mandela at the 1992 Barcelona Olympics, about the one question he always wanted to ask Cuban leader Fidel Castro.

He reminisces about his father’s love for baseball, and about his own realization as a young man that he wasn’t an aspiring jazz musician despite his love for music. Yes, music played a pivotal role in his life as a writer. But how? That’s a topic explored within these pages.

He shares tales about newspaper mentors and colleagues, including Red Smith and Shirley Povich, Jim Murray and Stanley Woodward, Dick Young and Jimmy Cannon. He reflects on racism and race relations in the 20th century through the prism of sports. 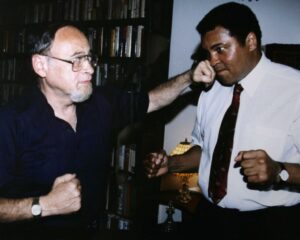 He discusses courage and heroism, using Olympic wrestler Jeff Blatnick and baseball player Jim Eisenreich as examples. He recalls his visit to Grambling University, a historically black university, to observe coach Eddie Robinson’s football squad when he was the first white reporter to do so. He brings horse races from the 1970s to life, reminiscing about Secretariat and Canonero II.

In Part II of the book, a who’s who of media colleagues, including Jerry Green and Dave Anderson, Ira Berkow and John Schulian, Dave Kindred and Wallace Matthews, Tim Brown and Jeremy Schaap, among others, offer their assessments of Izenberg’s career and what’s made it special. They also weigh in on Izenberg’s place in the pantheon of American sportswriters.

Not strictly an interview book, this project curates a wide mix of opinions from and about Jerry Izenberg to help people develop a broader understanding of his background, numerous career accomplishments and commitment to the community. He was the founder of Project Pride, which provided scholarships to college-bound students from his hometown of Newark, New Jersey, and also provided a range of sports and academic activities for students for three decades.

In short, it’s an anecdotal biography about a legend in his chosen profession.

An excerpt from Part I of “Going 15 Rounds With Jerry Izenberg.”

The bond between Jerry Izenberg and boxer Muhammad Ali extended beyond their jobs. It was truly unique, far beyond the typical relationships between journalists and pro athletes.

It’s 1974, and Izenberg is a recently divorced father. (At the time, Izenberg became the first father in New Jersey to be awarded sole custody of his children, he said.)

He also happened to be doing work in preparation for Ali’s fight in Kinshasa, Zaire, against then-world heavyweight champion George Foreman — The Rumble in the Jungle. Izenberg’s children, Robert, 11, and Jenny, 8, had just come to live with him two day s earlier, so his parental instincts are put to the test.

“I’m driving to Deer Lake (Pennsylvania), and I’ve got my daughter and my son in the car,” Izenberg recalled.

It was a challenging set of circumstances. Izenberg had plenty of work to do. In his heyday, he wrote five columns a week — plus numerous books and magazine articles. And over the years, he was involved in the narration, production and writing of 35 TV documentaries, among them the Emmy Award-nominated “A Man Named Lombardi,” about the inimitable NFL coach Vince Lombardi.

En route to Deer Lake, Izenberg is confronted with figuring out how to keep his children occupied while he is covering Ali’s training camp.

“He is crazy about television and I’m making a television show at the same time,” he remembered about his son, and gave him these instructions: “You can walk around with the crew; they know who you are. Don’t worry about it.’ ”

One down, one to go.

“His (daughter) says, ‘What am I gonna do?’ ” Izenberg recalled.

“Well, you go to Aunt Coretta (Ali’s paternal aunt) and tell her that you are the official water girl of the Jerry Izenberg television crew and she’ll give you a couple of bottles of water and you follow them around, but you keep your mouth shut.

“Then she proceeds to say, ‘I hope George Foreman knocks his block off.’

“I said, ‘You’ve got to remember something: Both of these men are my friends, No. 1. This is a business, No. 2. It’s not a war, so they ’ll do what they do to make their money. And you are going to keep your freakin’ mouth shut when you get in there.’ ”

That set the stage for the TV cameras to get rolling.

“So they go off and do what they do and we do the show,” Izenberg said, “and now we are in his locker room and we are talking very softly, and he say s to me, ‘Is that your son?’ ”

Ali asked Izenberg what his son’s name was, then walked over to him.

“He puts his arm around Robert and says, ‘Robert, I want to tell you something. You have come to live with a great man who loves you. Learn from him.’ And he gets up and walks away ,” Izenberg remembered.

“Well that’s a helluva thing to do for me,” he went on. “The kids have been scared. They came to live with me two days earlier.”

“So is this your daughter here?” The Greatest inquired in a quiet tone.

“When you’re 7 years old, 8 years old, tell me what you think we’re talking about. She thinks I’m ratting her out about what she said about him,” Izenberg pointed out.

“So she’s trying to put her shoulders into the molecules in the wall, right? Because she thinks I’m ratting her out.”

Izenberg’s daughter walks over to them slowly, and then…

“He swoops down, and he’s 6-3, and she wasn’t even 5 feet then,” the legendary columnist said. “He picks her up and holds her over his head. Now she has lost the total power of English. She cannot speak one word that means anything.”

The conversation shifted back to Ali.

“Is that your daddy?” he asked her.

“Is that your daddy?”

As they ’re driving home, Izenberg and his daughter begin discussing boxing again. “She says to me, ‘I hope Muhammad can win the fight.’”

Going 15 Rounds With Jerry Izenberg is available in paperback from Amazon and Barnes and Nobles and as an ebook from several online book shops, including Apple. 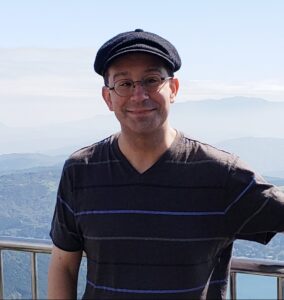 Ed Odeven, a graduate of Arizona State University, is a veteran sports journalist. Based in Tokyo, he is the sports editor for the English-language website JAPAN Forward.

Founder and Editor-in-Chief | An aficionado, my penchant for everything revolving the expansive world of sports has seen me rifle through leagues, tournaments, matches and events on the global stage to carve riveting bits of live news, updates and developments.