Deepak Chahar Ruled Out Of IPL 2022 In Fresh Back Injury Update, CSK To Name Replacement Next Week 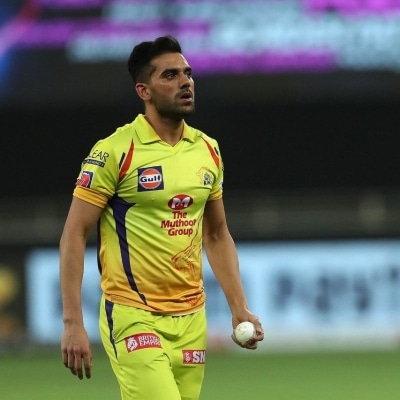 CSK bowler Deepak Chahar has now been ruled out of IPL 2022 in his latest injury update, know his replacement

In February, the pace-bowling allrounder had already recovered from a quadriceps rupture suffered against the West Indies

Deepak Chahar Ruled Out Of IPL 2022 In Fresh Back Injury Update: CSK To Name Replacement In Team Next Week

Deepak Chahar’s return to the IPL is uncertain after the India and Chennai Super Kings strike bowler had a back injury while undergoing rehabilitation at the National Cricket Academy in Bengaluru. The severity of the injury is still to be determined, since Super Kings are yet to receive a formal report from BCCI.

Chahar has been rehabbing at the NCA for nearly a month after suffering a quadricep rupture during India’s T20I series against the West Indies in February. While the NCA physios predicted Chahar would miss a significant portion of the IPL, the pace-bowling allrounder’s fast recovery has Super Kings hopeful of a return in late April.

The back ailment, on the other hand, is likely to jeopardise Chahar’s comeback to the IPL. The BCCI and Indian team management would prefer him to be in top shape as the country prepares for the T20 World Cup, which begins in October.

Chahar’s absence has already harmed the balance of Super Kings’ team this season. He is a swing bowler with the new ball as well as a capable lower-order batter. They’ve lost four games thus far out of five games. Most notably they’ve been missing him with the ball in the powerplay, where they’ve only managed two wickets at an economy rate of 8.62 in 24 overs throughout the losing four games. Moreover, they haven’t been able to find a suitable alternative.

Chahar, on the other hand, has a much better record with Super Kings in the same phase. He bowls with an economy rate of 7.61 and 42 wickets in 58 innings in his first six overs with the ball.

At the IPL 2022 auction, Super Kings paid INR 14 crore (about $1.84 million) for Chahar. However, the team now appears to be struggling without him. Despite the deployment of players like Mukesh Choudhary, Tushar Deshpande, Adam Milne, and Chris Jordan with the new ball, none of them have been able to give the essential control in the early phases of the match.

Super Kings have KM Asif and Rajvardhan Hangarkekar, among other alternatives, who can take the new ball in upcoming matches. While fans of the team want Ishant Sharma to be roped in, any decision by CSK on a replacement will only be made by next week.