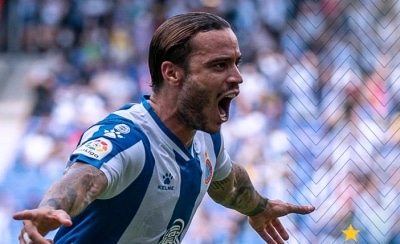 Both clubs confirmed the move on Tuesday, ending a difficult few months for the striker, who now returns to the club where he scored 38 goals in two seasons on loan from Real Madrid between 2017-19.

The 27-year-old fell out with new Espanyol coach, Diego Martinez at the start of pre-season and has not played one minute of the new campaign (although he has supposedly been carrying an injury). However, the breakdown in relations has led the Barcelona-based club to sell him to Rayo for less than half the 20 million euros they paid to sign him from Benfica in January 2020.

The fee is even more surprising given Raul de Tomas’ statistics with Espanyol, netting 45 goals in 89 games and ending last season with 17 goals in La Liga, making him the equal top-scoring Spaniard alongside Celta Vigo’s Iago Aspas.

He had a contract with Espanyol until June 2026 and earlier in the summer (when Real Madrid were rumoured to be considering him as a backup to Karim Benzema), the club had insisted anyone interested in buying the striker pay his 75-million-euro release clause, reports Xinhua.

De Tomas had been close to joining Rayo on the last day of the transfer window, but the clubs failed to complete the paperwork in time amid rumours of a fight between Rayo President, Martin Presa and De Tomas’ agent.

Now that deal has gone through, but the delay has one very important consequence: because the sale didn’t happen in August, De Tomas won’t be able to debut with Rayo until January and despite having forced his way into the Spain squad last season, his place in the World Cup squad is now in danger as Spain coach Luis Enrique is unlikely to take a player to Qatar who has not played any competitive football for six months.