Both teams will come here with a winning mentality which should allow them to showcase their talents with consistency. Welcome to the JFC vs HFC Dream11 team prediction and preview.

Jamshedpur FC won their last match (1-3) against FC Goa which should keep them boosted for another show of forward talent that can bring out the best in them.

Hyderabad FC started off their campaign with a loss which was well worked on in their (1-3) win against Mumbai City FC which can keep them boosting with confidence for this encounter.

Jamshedpur FC should win this match by a close margin.

Farukh Choudhary and Holicharan Narzary are injured for this game.

T.Rehenesh (8.5 Cr) has made 4 saves with 2 goals conceded along with 4 crucial clearances that can keep him confident to play a focused match.

P.Hartley (9.0 Cr) was more focused to his defense in the last match as the team was struggling which can push him to move forward to help the attack as seen in the first match.

A.Rai (9.0 Cr) was able to stop the opposition attack with 6 tackles and 9 blocks along with his attacking attempts that included 2 shots on target and 5 crosses that make him an important player.

A.Mishra (8.5 Cr) holds a passing accuracy of 70.51% along with 10 tackles that were backed up with his attacking skills with 8 crosses that should continue in this encounter.

A.Lima (9.0 Cr) is trying to create his attacking chances this season after bringing solidarity in the midfield which should be converted into better chances that make him our prime choice.

J.Singh (8.5 Cr) holds a passing accuracy of 82.75% which is just a brilliant addition to his improving form that can increase his contributions drastically in this contest.

J.Victor (9.0 Cr) has attempted 3 shots on target along with 1 cross that earned him a goal in his last match which shows his potential to play well under pressure which will be the case for this match.

M.Yasir (9.0 Cr) was able to create 6 tackles to create counter-attacking chances along with 8 crosses that can convert into goals in his upcoming matches.

N.Valskis (10 Cr) is boosting with confidence as he was able to score 2 goals with 1 assist in the first 2 matches that can motivate him to continue with his performance that makes him our prime choice.

G.Stewart (9.5 Cr) was able to showcase his unselfish nature by providing 2 assists that created most of his contributions making him a crucial contributor.

B.Ogbeche (9.5 Cr) has attempted 4 shots that earned him 1 goal which makes him a potential game-changer for this contest.

N.Valskis is our captain because of his fantastic attacking skills and consistent contributions.

A.Lima is our vice-captain because of his ability to create counter-attacking chances that can improve his performance. 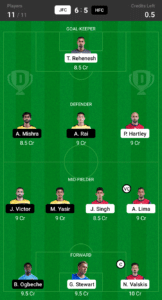 Ballon d’Or 2021 Winners: Premier League Club Chelsea Win The Best Club Of The Year, Know Why And What Is The Criteria Of The New Award