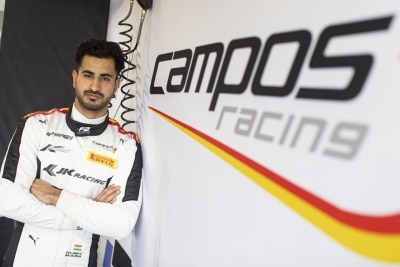 London, Nov 22 India’s young driver Kush Maini will race for Campos Racing in the 2023 FIA Formula 2 Championship season and will be at the helm of their Dallara F2 2018 cars for the 14 race to be held between March and November.

Maini is an upcoming Indian talent who has made excellent progress in recent seasons in the single-seater feeder series. He will become the second driver from his family after his brother Arjun Maini to participate in F2 Championship. India’s Jehan Daruvala represented Prema Racing in F2 Championships in the last two seasons.

“Campos Racing are delighted to announce that Kush Maini will join their driver line-up for the 2023 FIA Formula 2 Championship season at the wheel of one of their Dallara F2 2018 cars. Kush will join previously announced Ralph Boschung securing a lineup with a great mix of experience, new blood and driving skills,” the Campos Racing team announced on Tuesday.

Born in Bangalore in September 2000, Maini made his single-seater racing debut in 2016 by competing in the Italian F4 Championship. Maini rapidly showed his talent as he managed to step onto the podium on his season debut. The Indian driver then finished second in the 2020 BRDC British Formula 3 Championship with three wins and 12 podium finishes to his name. He entered the 2022 FIA Formula 3 Championship season with promising results as he also visited the podium, the release informed.

“Super happy to be joining the Campos Racing team! I’ve spent some time with the team at their workshop and really enjoyed the atmosphere and the professionalism, looking forward to the 3-day test in Abu Dhabi to officially start our relationship together! I would like to thank Mumbai Falcons, Omega Seiki Mobility, and JK Racing for all their support,” Kush Maini said on his joining the F2 Championship.

Kush becomes the second Maini to take part in the FIA Formula 2 with Campos Racing as his elder brother Arjun joined the Spain-based racing team for selected rounds back in 2019.

Both Boschung and Maini will carry out post-season collective testing for FIA Formula 2 in Abu Dhabi on November 23-25 in preparation for the 2023 season.

“On behalf of Campos Racing, I would like to extend a warm welcome to Kush (Maini). He is a very committed, professional racing driver with a great work capacity, so we expect he will be able to complete a strong rookie season next year. He carried out some strong performances in FIA Formula 3 this season and hopefully he will make further improvements in the ultra-competitive FIA F2 Championship,” Adrián Campos Team Principal, Campos Racing, was quoted as saying in the release on Tuesday.