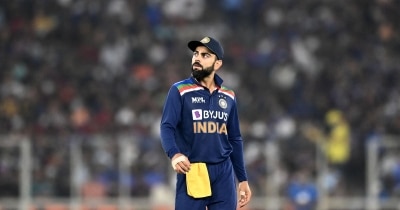 Apart from Sunday’s match at the Dubai International Stadium marking Kohli’s return to international cricket action after the tour of England ended on July 17, it will also see him become the first India player and only the second men’s player after New Zealand’s Ross Taylor to clock 100 appearances in all three formats of international cricket.

“I would like to take this opportunity to congratulate my very good friend Virat Kohli on becoming the first Indian cricket player to play a 100 matches across all three formats. What an amazing achievement Virat, we are all very proud of you and all the very best in your 100th T20 International game. Will be watching you,” said de Villiers in a video message posted by Star Sports, a long-time team-mate of Kohli while playing for Royal Challengers Bangalore (RCB) in the Indian Premier League (IPL).

Kohli, who hasn’t scored a century in international cricket since November 2019, has played only four T20Is this year. He made only 341 runs from 16 innings for Royal Challengers Bangalore (RCB) in IPL 2022, where he played under du Plessis’ captaincy, averaging 22.73 and at a strike rate of 115.99.

“Hey, Virat. I just wanted to send you a quick video message to say congrats on your 100th T20 International. Not only that, first Indian cricketer to play over 100 matches across all three formats. That’s another fantastic achievement that you can add to the list of amazing things you have already done.”

“But I’m also really looking forward to seeing the next few years what you gonna come up with, what other special thing we can see from you. I know that there’s a lot left in that tank of yours and I’m really excited to see it. Congratulations and good luck for the Asia Cup,” added du Plessis.

Sunday’s Group A clash will see the resumption of ‘greatest rivalry’ in the world of cricket when India and Pakistan take the field at Dubai International Stadium. This will also be the first meeting between these two teams after facing off in the Men’s T20 World Cup last year in the UAE, where Pakistan secured a resounding ten-wicket victory over India, their first such victory in Men’s World Cups.