HOME  »  BASEBALL   »   Watch Chicago Cubs Fan Fight Each Other In Stands As One Is Smashed Down The Bleachers By Another Supporter in Wrigley Field, Video Goes Viral

Watch Chicago Cubs Fan Fight Each Other In Stands As One Is Smashed Down The Bleachers By Another Supporter in Wrigley Field, Video Goes Viral 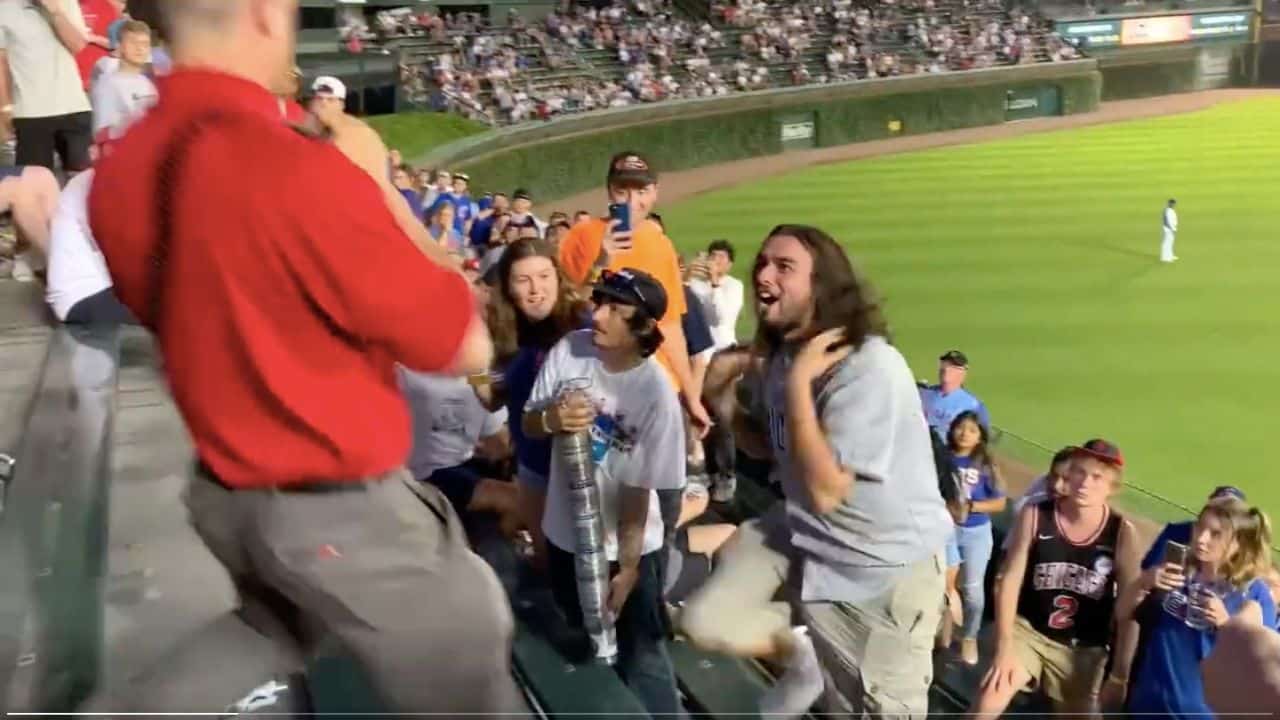 A fight erupted between Cubs supporters, indicating that the locals became agitated in the bleachers with the fans fight each other in stands video viral

It resulted in a spectacular fall.

This painful lesson was learned by a Cubs fan, who was then publicly humiliated. The loser of a battle with another spectator was sent flying down the stands. He attempted to play it off and stood up as quickly as he could, but it still occurred. The St. Louis Cardinals destroyed the Chicago Cubs 13-3 on Tuesday to sweep a doubleheader. Corey Dickerson had four singles, and Nolan Arenado and Tyler O’Neill each hit a home run in the fourth inning’s five runs.

Watch Chicago Cubs Fan Fight Each Other In Stands As One Is Smashed Down The Bleachers By Another Supporter in Wrigley Field, Brawl Video Goes Viral

Read an article stating Cardinals fans started a fight in the bleachers at Wrigley… I’m sorry, this is TWO CUBS FANS. They are literally fighting themselves. LMAO. Birds living rent free in 1st!!!!! https://t.co/2a2iyXrbeG

In game one, the Cubs shut out the Cardinals 2-0 to snap their season-high eight-game unbeaten streak. In his major league career, Javier Assad threw four shutout innings while working with four relievers on a five-hitter. With 16 hits in the nightcap, the Cardinals, who now lead the NL Central, returned to form. Tommy Edman had 3 RBI, a double, and a single home run. “Guys rebounded back and reacted well,” said St. Louis manager Oliver Marmol. “There was the offense. A lot of great at-bats, some injury.”

As the Cardinals drew away with 6 scores in the 9th, Dylan Carlson hit a two-run triple. For his debut pitching experience, Chicago designated hitter Franmil Reyes struck out pinch-hitter Albert Pujols with a 70 mph offering, then got Paul Goldschmidt to ground into a double game and struck out Paul DeJong. Jake Woodford (3-0) surrendered one run on 4 shots in 5 1/3 innings in his initial start of the season.

“You want to hit the ball hard, get quick outs, and get them down in the dugout when the offense is flowing like that,” Woodford stated. “They’re a force to contend with when this lineup is rolling.” Lastly, Arenado went 3-for-4 in the nightcap after going hitless in the opening. The seven-time All-Star is 11-for-25 in his most recent 25 games.

Who Is Caroline O’Connor Head Of Miami Marlins, Her Age, Husband, Education, Salary And Career