Brisbane Heat will be all set to lock horns against Sydney Thunder in this crucial KFC Big Bash League eliminator encounter. Welcome to the THU vs HEA Dream11 team prediction today and match preview.

Sydney Thunder were able to warm their place in the top 4 with an important win in their last match that could raise confidence levels to perform at their best in this important contest.

Brisbane Heat on the other hand were defeated in their last game and will aim to fight back with adversity against the opposition that claimed their chances to fight in the qualifier stages.

Sydney Thunder can win this match by a very close margin.

Matthew Gilkes (7.5 Cr) has the potential to create consistent batting contributions followed by his skills behind the stumps that could continue to help his performance.

Jimmy Peirson (8.0 Cr) was able to score 39 runs at a strike rate of 105.41 which has allowed him to focus on building his momentum to maintain his consistency in this match.

Oliver Davies (8.0 Cr) has not been at his best in the last 3 games but holds amazing potential to showcase his talents that could enhance his performance in this important fixture.

Alex Ross (7.0 Cr) was not at his best in the last match after losing his wicket at just 14 runs which could be his main motivation to bounce back making him a crucial contributor.

Josh Brown-I (7.5 Cr) has been consistent with his ability to find points in every match this season leading to a solid form that can continue to increase his focused performance in this match.

Daniel Sams (9.0 Cr) was able to score 28 runs at a strike rate of 155.56 along with 1 wicket in the last match with fantastic overall performances throughout the tournament which makes him our prime choice for this encounter.

Michael Neser (9.0 Cr) managed to add another 4 wickets with his amazing bowling performances throughout the series which makes him a potential game-changer for this contest.

Chris Green (8.5 Cr) added another 2 wickets to his name in the last match at a controlled economy rate of 4.75 highlighting his responsible role in the team which makes him a crucial contributor.

Nathan McAndrew (8.0 Cr) has not been at his best in the last 2 matches with fantastic wickets in the matches prior which should be his main focus to retain his form in this match.

Brendan Doggett (7.0 Cr) is a wonderful addition to the squad as he has managed to pick 8 wickets in just 3 games and should continue to enhance his performance in this contest.

Matthew Kunhemann (8.0 Cr) has been a consistent performer with the potential to find at least one wicket with greater potential to fight back for more in this important fixture.

D.Sams will be our captain and M.Neser will be our vice-captain because of their current form and consistent contributions in the recent games. 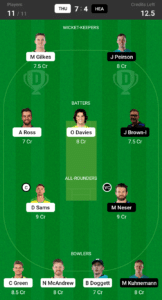