Vicente Guaita ( Crystal Palace – £4.6m) has provided solid contributions in all of his matches with 51 saves at this stage of the tournament with the potential to challenge Liverpool this week.

Trent Alexander-Arnold ( Liverpool – £8.4m) is on the verge of breaking his record for the highest number of attacking contributions which was held by him in the previous years that should keep him confident to push his form in his match against Palace.

João Cancelo ( Manchester City – £7.0m) was able to put forward a great show in his last match against Chelsea that earned him their 12th clean sheet with the ability to provide attacking contributions.

Rayan Ait Nouri ( Wolverhampton – £4.3m) was able to find 2 assists in his last match which can be channeled into his performance this week as they face Brentford which can improve his contributions.

Kieran Tierney ( Arsenal – £5.0m) has shown fantastic defensive resilience in his recent fixtures and will look to bounce back after a well-rested game week that can push him to perform well in this match against Burnley.

Diogo Jota ( Liverpool – £8.4m) was able to play a decent role in setting the stage for his team in the last match but was not able to contribute to his full potential which can be achieved with his performance this week.

Kevin De Bruyne ( Manchester City – £12.1m) will be boosting with confidence after a fantastic goal against Chelsea to push their lead ahead which can allow them to play without the pressure that makes him our prime choice.

Bernardo Silva ( Manchester City – £7.5m) has played a crucial role for his team with brilliant performances as an attacker and midfielder that can help him regain his form against Southampton this week.

Jarrod Bowen ( West Ham United – £6.8m) was able to score his 6th goal of the season along with his ability to find assists which can be tested to the limit in their match against wounded Manchester United.

Michail Antonio ( West Ham United – £7.9m) has scored 8 goals along with his 7th assist that came in the last match which should keep him confident to provide a similar performance in his upcoming fixtures.

Ollie Watkins ( Aston Villa – £7.7m) can make good use of the momentum this team has picked up at the moment which can allow him to maintain an attacking performance that can result in crucial goals.

Martin Dubravka ( Newcastle United – £4.4m) holds great potential which will be put through the wringer in his match against Leeds this week.

Luke Thomas ( Leicester- £4.6m) will be facing Brighton who are in form after a fantastic draw against Chelsea in their previous game week.

Lucas Moura ( Tottenham – £6.6m) was not able to build up on his momentum with his performance as a super substitute which reduces his chances to contribute drastically.

Joe Gelhardt ( Leeds – £4.6m) is deemed injured until the 9th of February after facing a brutal ankle injury.

Kevin De Bruyne is our captain because of his fantastic form and goal-scoring potential.

Trent Alexander-Arnold will be our vice-captain because of his consistent contributions in attack and defense. 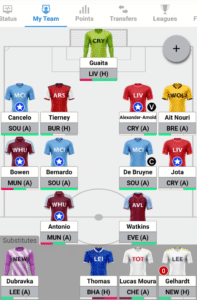