Khulna Tigers will be all set to lock horns with Minister Group Dhaka in this crucial contest of the Bangladesh Premier League. Welcome to the KHT vs MGD Dream11 team prediction and preview.

Khulna Tigers were brilliant last season with a brilliant show of overall talent in the group stages that was well channeled into their performances in the qualifiers to eventually losing the finals which can allow them to dust off and bounce back this year.

Minister Group Dhaka on the other hand were also able to showcase their talents that helped them until they lost their eliminators match which should bring out a stronger form to stay in contention.

Khulna Tigers should win this match by a close margin.

The pitch is preferable for batsmen and spin bowlers. The winners of the toss should bat first.

Mushfiqur Rahim (9.0 Cr) has scored 1465 runs in 90 T20I innings which should help him focus his skills on keeping the scoreboard in the middle order with his current batting form.

Soumya Sarkar (9.0 Cr) can score crucial runs as a top-order batsman that has earned him 1136 along with his potential to find wickets that should increase his contributions drastically in this match.

Andre Fletcher (8.5 Cr) can make decent contributions with his batting skills that have earned him 950 runs with a consistent form which can allow him to make good use of his current form.

Tamim Iqbal (9.5 Cr) scored 1758 runs at a strike rate of 116.96 in 78 T20 matches which can help him focus on his skills to increase his contributions that can push him to make his mark in this contest.

Naim Sheikh (8.5 Cr) is a fantastic young talent with brilliant potential to perform well under pressure that will be tested to the limit as has scored 794 runs in 32 matches.

Thisara Perera (9.5 Cr) is known for his responsible role with his performances for Sri Lanka as he can score consistent runs and find wickets to break partnerships.

Andre Russell (10 Cr) should be able to channel his wicket-taking skills and power-hitting stride into this competition which can boost his form for the upcoming matches.

Mahmudullah (9.5 Cr) has scored 1971 runs along with a recent improvement with his bowling skills that have earned him 36 wickets that makes him our prime choice.

Farhad Reza (9.0 Cr) has scored 892 runs along with 106 wickets in 125 T20 innings which should keep him focused on delivering a strong performance in this crucial match.

Mashrafe Mortaza (8.5 Cr) is a fantastic bowler with a total of 42 wickets in 53 innings along with the ability to create decent runs in the tail end of the batting order.

Shafiul Islam (8.5 Cr) has found 20 wickets in 20 matches at a controlled economy rate which should help him contain the opposition that can play a vital role in this fixture.

A.Russell will be our captain and Mahmudullah will be our vice-captain because of their overall skill and potential which can keep them consistent throughout the series. 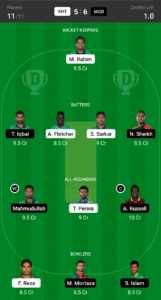 ALSO WATCH: Romelu Lukaku Booed By Chelsea Fans At The Amex Stadium After Brighton vs Chelsea