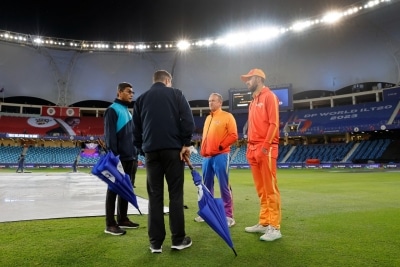 Dubai, Jan 25 Rain played spoilsport in a match between Gulf Giants and Abu Dhabi Knight Riders at the Dubai International Stadium on Wednesday as the 16th game of the ongoing ILT20 was abandoned, here.

The match was called off after officials waited till 20:30 hrs (UAE time) to determine whether the pitch would be playable after the heavy downpour. As a result, both teams shared one point each.

On the other hand, Abu Dhabi Knight Riders, who had lost all their previous five matches, earned their first point today but they remain at the bottom of the table.

Gulf Giants had come into this match after losing to Sharjah Warriors in their last match. Sharjah’s medium pacer Naveen-ul-Haq, through a five-wicket spell, had bowled out Gulf Giants for 130 while chasing a target of 152.

“It’s really unfortunate. We were really looking forward to this game. We wanted to get out there and play. We also wanted the two points. But these things are out of our control and we have to accept the situation. We will now focus on the game ahead of us,” said Gulf Giants head coach Andy Flower after the match got abandoned.

Meanwhile, Abu Dhabi Knight Riders, in their last match against MI Emirates, looked like recording their first win, but Andre Russell, who bowled the last over, failed to defend the 20 runs needed to win the match.

“It’s good to have a point. Hopefully, this could be the turning point for us. We have to take it step by step and see how the next game pans out for us,” said Abu Dhabi Knight Riders captain Sunil Narine.