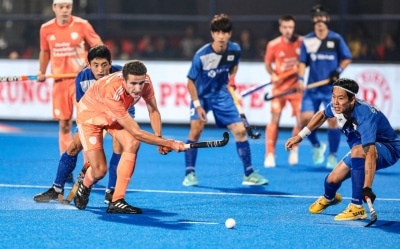 Bhubaneswar, Jan 25 Netherlands thrashed South Korea 5-1 in the last quarterfinals match at the FIH Odisha Hockey Men’s World Cup 2023 to reach the semifinals of the tournament at the Kalinga Stadium, here on Wednesday.

The Dutch team will now face Belgium in the semifinals on January 27.

Netherlands and Korea played a fascinating first quarter in the quarterfinals. It was end to end action as both teams looked to play on counter-attacks and managed to find spaces through the midfield to successfully penetrate opposition circles.

Both teams also won 2 penalty corners each, but all 4 penalty corners amounted to very little, thanks to some brave number one running from the defences. Netherlands had the best chance from open play as Pieters went on a great run from his own circle all the way to the Korean circle, but his shot was well saved by Jaehyeon Kim.

The second quarter was much of the same as the teams traded possession on counter-attacks. Korea had a great chance on one of their attacks launched from a turnover they forced at the halfway line. Hwang’s driven pass into the circle nearly found the diving Junwoo, but Lars Balk got a crucial touch right before the pass got to Junwoo to send the ball out over the baseline.

Netherlands opened the scoring in the 27th minute as Thierry Brinkman cut through the Korean defence from the right and his attempted pass was almost intercepted Jungjun, but he failed to make a clean connection on the ball and Koen Bijen was there right behind him to latch on to the loose ball and put it in the back of the goal to give Netherlands the lead they would carry into the interval.

Netherlands won an early penalty corner to start the second half and while Kim saved Jansen’s flick, the rebound was collected brilliantly by Bijen and he tapped the ball on the reverse to double the Dutch lead. The Netherlands sensed the momentum shift and they kept the pressure up on the Koreans.

The Dutch pressure paid off soon as they scored a third goal when Jip Janssen’s slap pass was deflected in from the top of the circle by Justen Blok, who scored his second consecutive goal, after finding the net in Netherland’s previous game against Chile.

Netherlands added a fortuitous goal early in the final quarter as an attempted interception by Seunghoon on a pass by Heijningen, ended up looping the ball over the keeper and into the goal. Korea would finally end Netherlands’ run of 15 consecutive quarters without conceding a goal through Seo Inwoo, but with a 4 goal deficit, a comeback looked unlikely.

Netherlands added the final goal of the contest in the 58th minute as Teun Beins put away a penalty corner won by captain Thierry Brinkman to give the Dutch a comfortable 5-1 win and take them to their 4th consecutive semi-finals at an FIH Hockey Men’s World Cup.

Koen Bijen, scorer of the first two goals for the Dutch, was awarded player of the match.

“25+ goals scored and 1 conceded shows we have had a great tournament. Our defence is really solid and sets us up to build in attack. Congratulations to Korea as well. They played a really good tournament and played very well in this game too. We enjoy playing against Belgium, we play them quite frequently in Europe, so bring on the semi-finals,” said Bijen.

KIYG 2022: Haryana surge to the top with seven golds in boxing, Maharashtra on second spot (Round Up)