Football: India go down 0-3 to Uzbekistan in U-17 friendly 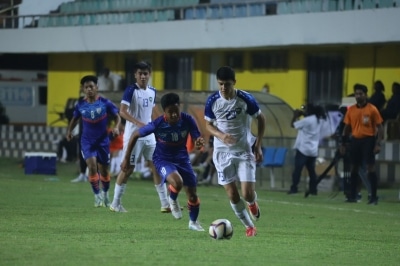 Vasco da Gama (Goa), Jan 25 The Indian U-17 National Team went down 0-3 against Uzbekistan in the second friendly at the Tilak Maidan here on Tuesday.

India ran out 2-0 victors on Sunday in the first of two friendly matches as part of the preparations for the AFC U-17 Asian Cup to be held in Thailand in a few months. However, the Blue Colts were unable to repeat their brilliant performance on Tuesday, conceding three unanswered goals against a rejuvenated Uzbek side.

Indian head coach Bibiano Fernandes made a solitary change from the first match, with Balkaran Singh replacing Malemngamba Singh Thokchom at left-back. Looking to bounce back from Sunday’s defeat, Uzbekistan made four changes as Mukhtorov, Yokubov, Abraev and Urmonjonov all came in. The latter two also wrote their name on the scoresheet, the AIFF informed in a report on its website.

The visitors’ quick passing put India under pressure early on. A mistake from centre-back Surajkumar Singh Ngangbam allowed Uzbek captain Amirbek Saidov to shoot from point-blank range, but Indian goalkeeper Sahil thwarted the attempt. The Blue Colts subsequently launched a counter-attack with Lalpekhlua racing down the left flank. However, his intended cutback for Korou Singh Thingujam was well-intercepted by Bekhuruz Shukurullaev.

Lalpekhlua, who found the net on Sunday, exploited a gap in the visitors’ backline and smartly picked out an unmarked Ricky Meetei Haobam inside the box. However, the right-back’s first-time shot was weak and was easily gathered by Asilbek Numonov.

The second half completely belonged to Uzbekistan as the hosts failed to find any rhythm. Jamoliddin Rakhmatullaev’s side opened the scoring nine minutes into the second half when Oybek Urmonjonov received a pass from Kuvonchbek Abraev on the edge of the box and rifled it past Sahil with his left foot.

India were gifted a golden opportunity to equalise in the 65th minute but couldn’t make the most of it. After intercepting a poor goal-kick from Numonov just outside the box, Vanlalpeka Guite raced clean through on goal but drove it wide of the far post. That glaring miss proved costly as Uzbekistan doubled their lead two minutes later, putting the game out of India’s reach.

Urmonjonov and Abraev, the protagonists of the first goal, combined again as the former picked out the latter with a lofted ball inside the area. Abraev then drilled a low shot past Sahil, who could’ve done better at his near post.

In the 72nd minute, midfielder Danny Meitei found space 25 yards from goal and unleashed a powerful shot which went just inches wide of the post, summing up a frustrating night for the Blue Colts. Four minutes later, Uzbek substitute Abdulkhamid Turgunboev sealed the victory for the visitors with a simple tap-in on the rebound after Sahil had made a good save to deny Saidov.