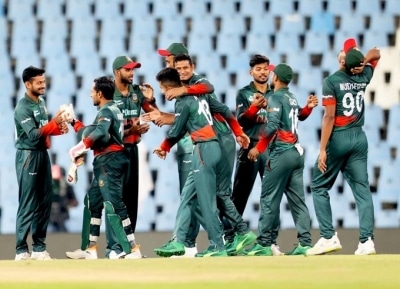 Bangladesh will be all set to lock horns against Zimbabwe in this crucial T20I encounter. Welcome to ZIM vs BAN Dream11 team prediction today and match preview.

Zimbabwe have managed to gain strong momentum in the last few matches which has earned them 5 wins in their last 5 matches which could lead to a similar form in this series.

Bangladesh on the other hand were able to bounce back in the ODI matches to win 3 of the last 5 games in their previous series which should allow them to find their upward spiral in this contest.

Bangladesh can win this match by a close margin.

The pitch can favor both departments. The winners of the toss to bat first.

Regis Chakabva (8.5 Cr) has been consistent with his performance in the middle order with a total of 112 runs along with a strike rate of 107.69 in the last 6 T20I matches which can improve in this important series.

Liton Das (9.5 Cr) has scored 242 runs at a consistent strike rate of 127.36 in 13 T20I matches with an improving form as seen in his last series which makes him our prime choice for this encounter.

Craig Ervine (8.5 Cr) is an experienced batsman who has scored 151 runs as a middle-order batsman with a strike rate of 111.85 which should allow him to find a consistent form.

Afif Hossain (10 Cr) is a responsible batsman with a total of 1055 runs in the last 25 matches along with the ability to showcase decent bowling skills that make him a crucial contributor.

Najmul Hossain-Shanto (8.5 Cr) is relatively new to this format but has managed to score runs to keep the scoreboard moving which can prove important in this fixture.

Sikandar Raza (10 Cr) leans more towards his bowling skills that have earned him 12 wickets which can keep him motivated to perform well as he will fight back to make his mark on this challenge.

Sean Williams (9.5 Cr) has been brilliant with his recent performances that earned him 75 runs at a strike rate of 111.94 along with 7 wickets that can keep him focused on this match.

Mahedi Hasan (9.0 Cr) can bring his experience into good use with a total of 835 runs with 21 wickets in the 37 T20I matches which makes him our prime choice for this encounter.

Wellington Masakadza (8.5 Cr) has managed to showcase improvements in the recent matches which can be channeled into the T20 matches that has earned him 16 wickets.

Mustafizur Rahman (9.0 Cr) has been a consistent bowling contributor with improvements with his T20 stats which could allow them to give their all in this important fixture.

Nasum Ahmed (8.5 Cr) can play an important role with a decent bowling outcome in the recent matches that have earned him a total of 28 wickets in 22 T20I innings which can keep him confident for this match.

M.Hasan will be our captain and L.Das will be our vice-captain because of their ability to provide consistent contributions that can improve in this series. 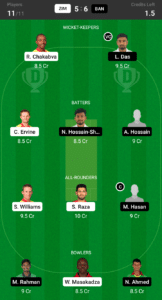