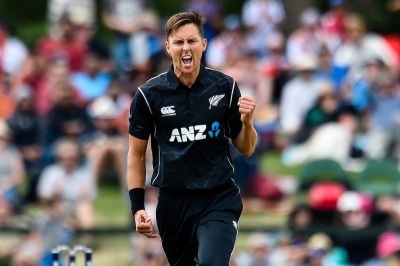 New Delhi, Nov 27 According to Bryan Stronach, General Manager of High Performance in New Zealand Cricket (NZC), premier left-arm pacer Trent Boult is still very much interested in playing for the national side and could also be on the flight for the 2023 ODI World Cup in India.

In August this year, NZC had agreed to release Boult from the central contract, citing a need to spend more time with his family and to make himself available for franchise T20 leagues. Though Boult played in New Zealand’s tour of West Indies, Australia and T20 World Cup, he wasn’t selected for the ongoing white-ball series against India.

“The next World Cup for us is the one-day World Cup over in India, so I think he would love to be part of that. Trent’s off doing his thing but he still loves this team, and he still really wants to play for New Zealand and he’s talking to us around that,” said Stronach on SENZ’s Saturday Sessions show.

In 99 ODIs, Boult has picked 187 wickets at an average of 23.97 and economy rate of 4.93, forming a vital new-ball pair with senior right-arm pacer Tim Southee. After opting out of central contract, Boult has signed up with Melbourne Stars in the Big Bash League (BBL) and for MI Emirates in the inaugural edition of ILT20 in the UAE.

Stronach firmly believes Boult will be back on the international cricket arena well in time to be there for the 2023 ODI World Cup. “So, I think all going well for him and so forth, then he would love to be part of that World Cup squad and probably some series leading into it so we can perform the best we can.”

“He definitely still loves playing for his country … we haven’t got to the actual nuts and bolts, but he still wants to play for New Zealand. The World Cup’s still a week way away so we’re not picking the World Cup squad as of now but yeah … he’s definitely not saying to us that he doesn’t want to be a part of that, put it that way. If (he gets selected) he’ll be there.”