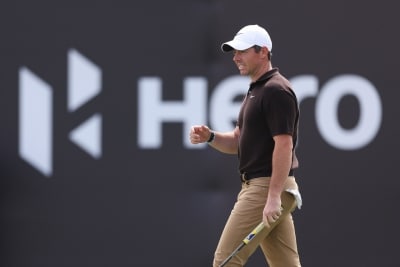 Dubai, Jan 25 Shubhankar Sharma will be the lone Indian in the star-studded field as he gets ready to build on the fine start to his year.

Sharma, 29th in the DP World Tour rankings in 2022, was tied seventh last week in Abu Dhabi HSBC Championship, and is now hoping to get a good result in Dubai, where he has never finished in Top-10 in five previous starts.

“I need to set the record right,” said Sharma. “I am feeling comfortable. I was here in Dubai before coming to Abu Dhabi and practiced here. This is a great place and I have a lot of Indian supporters.”

Sharma has also sponsored a bunch of Indian youngsters to come and watch this event as part of his ‘giving back to the game’. “I want them to come and see world class golfers and World No. 1 Rory McIlroy and start dreaming. That’s what happened to me when I saw the big stars in India when the European Tour came there,” he recalled. Sharma was among the youngsters, who were in a clinic taken by Ernie Els.

Dubai was lashed by rains on Wednesday evening and the weather is expected to be rough even on Thursday. But the Emirates Golf Club should be ready for the champions, led by World No. 1 Rory McIlroy.

This strong field includes McIlroy, Shane Lowry, Tommy Fleetwood and Tyrrell Hatton, who have already played in the Hero Cup and the Abu Dhabi Championship.

McIlroy himself had one of his best showings in 2022 with Top-8 finishes in all four Majors in 2022 and won three times. He also won both the FedExCup and the DP World Tour’s Order of Merit.

The $9 million Hero Dubai Desert Classic is the second straight week of Rolex Series event on the DP World Tour. The winner walks away with $1.53 million and with important Ryder Cup points.

McIlroy said he has unfinished business at the Hero Dubai Desert Classic when he gets his 2023 DP World Tour campaign under way this week.

Emirates Golf Club has been a happy hunting ground for the Northern Irishman, who won this event in 2009 and 2015, and has seven other top-10s to his name. He has not finished outside Top-10 in his last nine starts here.

The four-time Major Champion had been firmly in contention on the back nine of the Rolex Series tournament before finding the water at the 18th to surrender a bogey and miss out on a play-off by one shot.

The 33-year-old bounced back to top the season-long Rankings, lifting the Harry Vardon Trophy on his last visit to Dubai in November, and is hoping for a strong performance in his first event of the year.

Meanwhile Tommy Fleetwood is relishing home comforts this week as he looks to build on a host of impressive recent performances.

The Englishman, who now lives in Dubai, has been in fine form in recent months, winning the Nedbank Golf Challenge in November and finishing in the top five at the season-ending DP World Tour Championship a week later.

He kicked off the new year by captaining Great Britain and Ireland at the Hero Cup before putting in a solid display at last week’s Abu Dhabi HSBC Championship.

The 32-year-old has a good record at Emirates Golf Club, finishing in the top 20 in each of his last five appearances at this event, and he is happy to be back there this week.

McIlroy said, “It’s really nice to be back. I’ve had a lot of great memories here and success over the years at the Emirates but feel like I have a little bit of unfinished business with how the tournament ended for me last year here.

“It wasn’t quite the way I wanted to finish it off. But I went on from that week and played really well and had a great year.

“It’s been nice to try to take a little bit of time away, and try to sort of distance myself from the game of golf for at least a month or two, and sort of recharge and reset and try to start 2023 with renewed optimism and a sort of full tank and ready to go.

“I’m sure there will be a little bit of rust to start the week but hopefully I can shake that off. I’ve got a great record here, so I have great confidence in that.”

“I first played this tournament in 2006. So I’ve been coming here for a long time, 17 years. I’ve got a level of comfort here. I like starting my year here. I have a lot of friends. I called this place home for four years. I like it. I get great support here with the crowds that come out.”

Fleetwood added, “I think it’s a rare opportunity and a rare thing for pretty much every one of us that we get to spend a week at home while playing in a tournament.

“I just love sleeping in my own bed. I love doing things in my own house. So it’s a bonus this week, absolutely is. Just kind of makes things that little bit more novel and comfortable, and no matter how much travelling you do, there’s nothing quite like being in your own home.

“I think Emirates Golf Club has become an iconic venue, an iconic tournament and I was just saying before, I’m definitely of an age where I got to watch it a lot on TV as the tournament was building and building and having champions like Monty and Tiger and Ernie or people like that.”