Sydney Sixers will be all set to lock horns against Perth Scorchers in this crucial KFC Big Bash T20 qualifier encounter. Welcome to the SCO vs SIX Dream11 team prediction today and match preview.

Perth Scorchers have lost 1 of their last 5 games and holds a strong squad that will look to battle for their place in the upcoming rounds which could lead to a fighting form in this match.

Sydney Sixers on the other hand are on a superb 5-match winning streak that could enhance their talents to maintain their momentum that can continue to help their form in this contest.

Sydney Sixers can win this match by a very close margin.

Josh Inglis (9.0 Cr) holds great batting potential but was only able to contribute with his work behind the stumps that can increase his points on this match.

Josh Philippe (8.0 Cr) has covered all of his contributions with his skills from behind the stumps in the last 3 matches with greater batting potential that could keep him motivated for this contest.

Ashton Turner (8.5 Cr) leaned more towards his bowling skills and managed to add 2 wickets to his name in the last match which can increase his contributions as an important performer.

Steven Smith (9.0 Cr) scored 66 runs at a strike rate of 200 in the last match which has been consistent in the last 3 games to make him a crucial contributor form his team.

Jordan Silk (8.5 Cr) has managed to provide a necessary boost in the middle order with decent contributions in both matches that can help him make the most of his performance this year.

Aaron Hardie (9.0 Cr) was able to pick 1 wicket at an economy rate of 6.75 along with 22 runs that should keep him focused on improving his performance in this fixture.

Hayden Kerr (8.5 Cr) added another 2 wickets to his name leading to a decent bowling form that could be well backed up by his decent batting form which makes him our prime choice for this encounter.

Andrew Tye (9.0 Cr) has managed to stay consistent with his bowling performance which has earned him 4 wickets in the last 3 games and could lead to a focused performance in this match.

Jason Behrendorff (8.5 Cr) was rested in the last match but could make his way back to starting 11 as he could maintain his chances with a show of wicket-taking talent necessary for this important qualifying fixture.

Sean Abbott (9.0 Cr) has also picked 6 wickets in 2 matches that can keep him confident to perform well with consistency which makes him our prime choice.

Ben Dwarshuis (8.0 Cr) managed to showcase his batting capabilities in the last match after scoring 30 runs at a strike rate of 214.29 in his last match that can be well backed up by his bowling composure.

S.Abbott will be our captain and H.Kerr will be our vice-captain because of their current form that can allow them to find important wickets in this match. 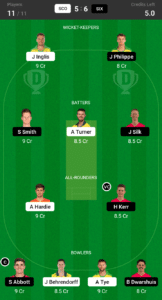