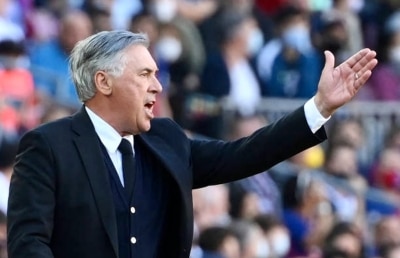 Madrid, April 29 Real Madrid coach Carlo Ancelotti has promised changes in the team that will face Espanyol on Saturday in a game that could assure this season’s La Liga title for the club.

Ancelotti will rest some key players in the upcoming match. A point against Espanyol will assure Real the title with four games left for this season, but they need a victory in the Champions League semi-final return leg at home to Manchester City on Wednesday after the Spanish side lost 4-3 in the first leg.

Some of the changes are forced by injury and suspensions, with David Alaba struggling for fitness, while Nacho Fernandez and Eder Militao are suspended.

That means Jesus Vallejo looks set for a rare appearance, while Casemiro could drop back into defense to provide cover.

“We have problems in defense, I don’t have Alaba, Nacho, or Militao and I have to play Vallejo, who has played very little, but who has always been professional. I have to use a central defender, who could be Casemiro and in the middle, I have a fresh player, such as [Eduardo] Camavinga or [Dani] Ceballos.”

The coach also hinted that he could rest forwards Karim Benzema and Vinicius Jr for the game, reports Xinhua.

“I also have to make choices in the attack. [Marco] Asensio is fresh and we have to see if Karim Benzema is fully recovered. I am going to pick a team to win the game,” said Ancelotti.

“If a player is in good shape and has recovered well, they have to play, but if someone needs a rest, then I will give them a rest,” he added.

Finally, Ancelotti admitted that he hadn’t thought about any celebrations if securing the title, adding that “we have only thought about the game.”