Both teams are enjoying a similar series of matches in the recent games as they will be ready to fight back in this encounter. Welcome to the ATKMB vs BFC Dream11 team prediction today and preview.

ATK Mohun Bagan FC have not lost a match in the last 5 games with 2 wins followed by 3 draws that has pushed them to the 5th place which should motivate them to give their all to stay in top contention.

Bengaluru FC on the other hand will be boosting with confidence after defeating MCFC in their last match with the ability to channel their strengths in this fixture.

ATK Mohun Bagan FC should win this match by a close margin.

Gurpreet Singh-Sandhu (8.5 Cr) played an important role in the last match that helped him make 4 saves to keep his team in contention that has earned him a well-deserved clean sheet.

Tiri (8.5 Cr) has managed to provide a fantastic balance with his performance in attack and defense which should allow him to continue with his decent contributions in this contest.

Pritam Kotal (8.5 Cr) can create his contributions with his interceptions and tackles that is well backed up with his passing accuracy that should keep him confident in this match.

Alan Costa (9.0 Cr) is consistent with his performance throughout the tournament with solid work in defense along with the danger he possesses with his attacking potential that can keep in contention.

Hugo Boumous (9.5 Cr) has been working his way through the defense to provide his contributions that have earned him 5 goals and 3 assists with the potential to provide a strong form that makes him our prime choice.

Deepak Tangri (8.5 Cr) has provided 1 assist in the tournament with brilliant tackles and interceptions to push counter-attacking chances that make him an important player in midfield.

Bruno Silva Almida (9.5 Cr) is consistent in almost all the matches with a recent drop in form that should be regained to remain in contention for this contest.

Danish Farooq Bhat (9.0 Cr) scored an important goal in the last match that helped them maintain their focus in pushing their opposition to generate momentum

Roy Krishna (10 Cr) was rested in the last game but should be able to make his way through to providing an important win that can push his current form that has earned him 4 goals and 4 assists.

Liston Colaco (9.0 Cr) can prove to play a vital role with his developed form which can provide them with a strong attacking form that earned him 5 goals with 1 assist that makes him our prime choice.

Cleiton Silva (10 Cr) has scored 5 goals with 3 assists in the tournament which has helped him keep his team in his best-attacking form that makes him a potential game-changer.

Hugo Boumous is our captain because of his contributions and improvements in the recent games.

Liston Colaco is our vice-captain because of his ability to provide attacking chances that can push his form. 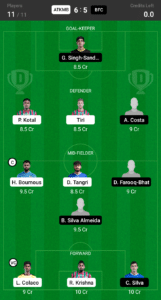 ALSO READ: Is This The Start Of Jose Mourinho’s Meltdown At AS Roma